Jasmin is a sought-after songwriter, vocal coach and actress. Born in Berlin, she trained in classical ballet and modern dance as a child, and took singing lessons for many years.

These skills, coupled with a great deal of talent, led to her being involved in some exciting projects from an early age. Since 2001, she has been a member of various music acts, including Jan Delay, Ben Becker and Yvonne Catterfeld. She has also been a guest lecturer at the renowned University of Popular Music and Music Business in Mannheim. As a songwriter, she is the woman behind the hit songs of Andreas Bourani and his quadruple platinum album ‘Hey’. Matthias Schweighöfer also trusted in Shakeri’s talents for his debut album ‘Lachen, weinen, tanzen’, which made it into the Top 10 of the German album charts.

As a vocal and performance coach, she supervised the cast for the German musical film ‘Ich war noch niemals in New York’, which among others starred Moritz Bleibtreu, Heike Makatsch, Uwe Ochsenknecht and Katharina Thalbach. Jasmin Shakeri can also be admired as an actress, for example in the mini-series ‘Crews & Gangs’ by Neco Çelik, in Christoph Gampl’s ‘Man of Beirut’ and in the ZDFneo sitcom ‘Deadlines’. She additionally supports various social projects of the European Union with her coaching.

Jasmin Shakeri already showed in the VIVID Grand Show what it means to write fantastic, uplifting songs. She will now also contribute her many talents to the ARISE Grand Show. 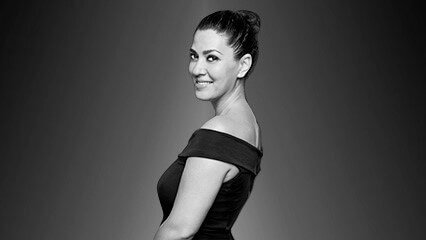